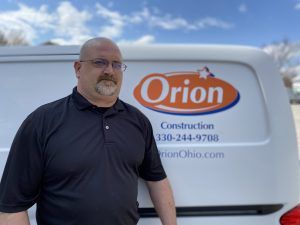 Bill has been with Orion Construction from the day it opened. Bill began his construction career in flooring as an apprentice at Heritage Carpet in North Canton for 12 years. He changed careers and became a Crew Chief for our sister company, Servpro of West Akron. When we opened the construction division his experience was an asset to Orion. He is the Director of Estimating and oversees his estimators on all projects. Bill is always on call for our 24 hour emergency board ups.

Bill was born in NE Ohio, but moved throughout the United States and Europe as a child due to his father being in the Army. He came back to the Canton area where he lives with his wife and three teenage children. He enjoys fishing, hunting and working out.